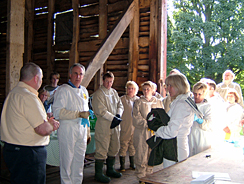 The North Shropshire Beekeeping Association was founded on Friday 23 August 1945.

The increase of Beekeeping during the 1940's

"Due to sugar rationing in World War II, honey was in great demand. As part of the war effort, everyone was encouraged to grow their own produce, and it was quite common to see two or three beehives in a garden or on the allotments. The bees helped to pollinate the crops and the honey boosted the meagre sugar ration. The rationing of sugar continued well into the 1950’s.  Honey was useful in other ways other than just as a food stuff. It could be used to dress wounds due to its antiseptic properties and was said to speed up the healing process. It was also used until penicillin became available and, it was believed, helped reduce scars. It is still used today in the treatment of burns, and is a component in some medications for ulcers."
(extract adapted from BBC article 'Beekeeping in Swindon during WWII')

We are collating an archive of material relating to the history of the Association and hope to be able to publish aspects of this within these pages.

If you have any documents, photos or stories to tell relating to the history of the Association (or beekeeping in North Shropshire in general) which you would like to share, please contact the Association Secretary